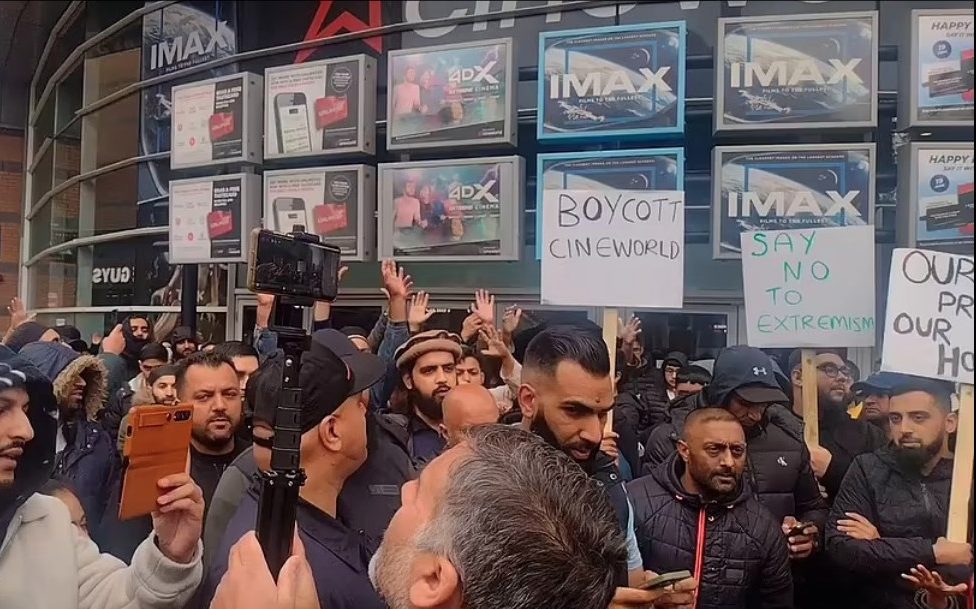 Cineworld has halted a film chronicling the life of the Prophet Mohammed’s daughter after protesters gathered outside the theaters and branded it “blasphemous”.

Hundreds of protesters rallied at theaters in Bradford, Bolton, Birmingham and Sheffield after screenings of The Lady of Heaven over the weekend.

Produced in the UK, the epic tells the story of an Iraqi boy who is orphaned when his mother is executed by ISIS militants.

The child is adopted by a woman who comforts the boy with the story of Saint Fatima, and the viewer is transported back to the seventh century.

Islamic tradition forbids the direct depiction of religious figures, and the film’s director, Eli King, portrays Fatima as a faceless figure draped in a black veil.

Now, after four days of protests, Cineworld has decided to remove the film from all of its cinemas and it is understood that Vue has also canceled screenings in several of its cinemas.

Crowds were filmed outside a venue chanting “Allahu Akbar” as the cinema’s manager announced through a megaphone that they had canceled all future screenings.

The film’s executive producer, Malik Shlibak, called the decision to pull the film “unacceptable” and accused the chain of “bowing to radical extremists.”

He said: “I really believe from all sides, from cinema maybe from the Muslim Council of Britain, that there is this surrender and submission to these radical extremists and their demands.

“I think this is more than The Lady of Heaven as a single film, it’s about our British values ​​and how much they mean to us.

“These groups now have the power to dictate what the British public can and cannot see in their local cinemas.”

The Muslim Council of Britain (MCB) called for “respectful dialogue” but said some of the film’s supporters engaged in “sectarianism” and tried to “incite hatred”.

The council said: “The MCB, proudly representing members from the diverse schools of thought of our faith, supports those scholars and leaders who work for greater unity and for the common good, as commanded by our Holy Prophet (peace be upon him). him).

“The MCB has always advocated a respectful dialogue of intra-religious relationships.

“There are some – including many of the supporters of this film or those who engage in sectarianism in their response – whose primary goal is to incite hatred.

“We must not let them succeed.”

A protester in Bradford, West Yorkshire, said: “We are very offended. We have the right not to be offended.

“You have no right to tell us our story. We will not continue this film.”

Others carried signs reading “It’s not okay to insult 1.8 billion #handsoffoursuperheroes” and “Stop screening” while using megaphones to get their message across.

Breach of the fleece? Alpaca in the boot takes officers by surprise

‘We’re Not Striking Deals With The Lib Dems Or SNP,’ Labour MP Says