When a guest walked into his local KFC restaurant, he never expected to see an eye-catching sign on the door. They quickly posted it on Facebook and when local police saw it, they arrived immediately.

When KFC patrons from Gallipolis, Ohio stopped by their local KFC to order their favorite combo, the signage on the window caught their eye. However, after reading what it said, they immediately wanted to share it on social media — and it’s since gone viral.
The sign on this KFC reads:

“All Uniformed Cops Eat Free All Day Every Day” 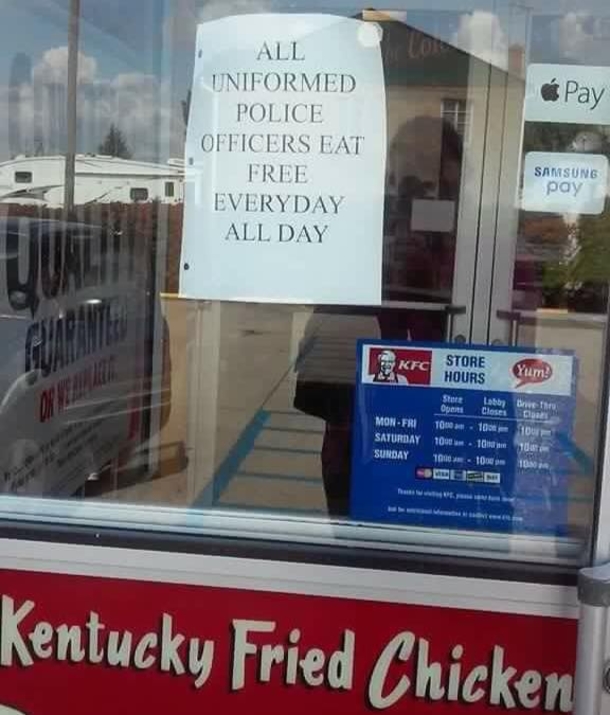 The photo was originally posted to the Ohio Going Blue Facebook page after someone at the Gallipolis Police Department broke the good news. Offering a free meal to uniformed police officers is a wonderful idea and proves that they are still respected by many across the country. Plus, it’s safe to assume this restaurant will never be robbed or burned down.

Now more than ever, it’s important to build friendly relationships between law enforcement officials and the rest of the community.
It turns out there are a number of KFCs that offer free meals to officers on duty. One commenter had this to say about their local facility:

Commenters on the post love the sign and what it means to cops. “Awesome!! I knew I’d always loved KFC,” said one commenter. While another pointed out exactly what many people were thinking: “Should be in all restaurants nationwide.”
This is a great way to say “thank you” to those who deserve it the most.

Are You at Risk For a Dryer Fire? Many Louisiana Residents Are

Roe vs Wade: America’s rival camps dig in for fight after abortion ruling

US rapper Coolio will be ‘missed profoundly’ following death aged 59

David Beckham congratulates Lionesses and thanks team for inspiring his daughter