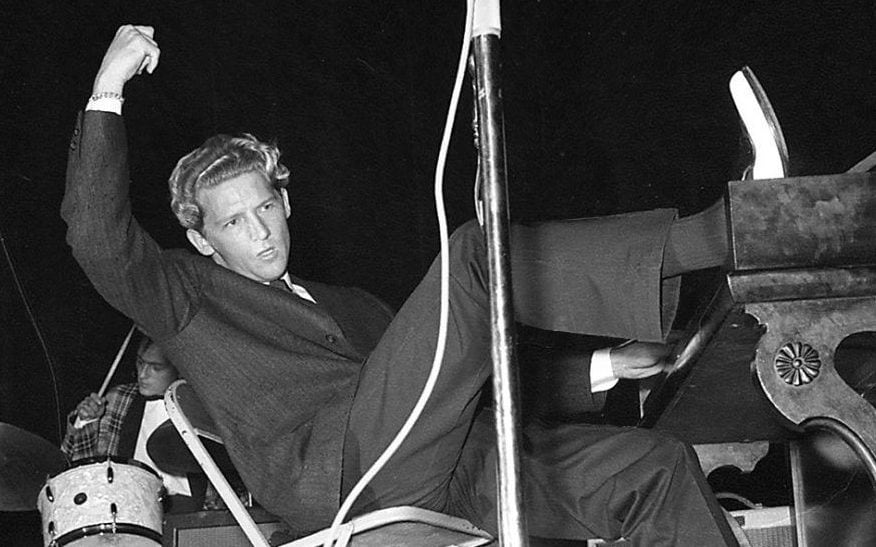 If Jerry Lee Lewis hadn’t already existed, the Coen brothers would have had to invent him. The 86-year-old Louisiana singer and pianist has lived a more confused life than Fargo’s blackmail scheme. There were his seven marriages, the third to his 13-year-old cousin; the failed attempt to play Jesus Christ in a Hollywood film; even an arrest outside Graceland in 1976 on the grounds that he was allegedly planning to shoot Elvis Presley.

The music itself was just as random – not only in its flamboyant, piano stool-kicking execution, but also in terms of genre and popularity, which have zigzagged wildly since epoch-making rock ‘n’ roll numbers like Whole Lotta Shakin’ Goin’ On and Great Balls of Fire faltered in the late 1950s. Even the hair had a Coen-like quality — at the start of a performance it was as neatly coiffed as George Clooney’s in O Brother, Where Art Thou?, but after a minute or so of that driving boogie-woogie bass line, the gaze was closer to Nicolas Cage in Raising Arizona.

Perhaps all of this makes the man known as the killer a natural subject for this first Ethan Coen solo film, which premiered in Cannes last night. It’s a funny and affectionate, if rather insignificant, archival documentary made up almost entirely of concert footage – the latest from January 2020 – and clips of Lewis giving interviews on television collected throughout his career.

It couldn’t be less like Coen’s older brother Joel’s solo debut: last year’s snappy and sinister adaptation of Macbeth for AppleTV+. This film felt like the work of a great director who deliberately stepped out of his comfort zone. In contrast, this one has the feel of a father’s secret project, as if Coen would have spent his Sunday afternoons drilling and hammering it together in the garden shed. (It was co-edited by his wife, Tricia Cooke, who edited or edited seven of the Coen brothers’ films.)

Trouble in Mind has an almost celebratory tone, cheering Lewis’s driving music and irascible personality at every turn. Of course, he could hardly avoid bringing up the matter of his marriage to his cousin, but given that the entire film was pieced together from archival footage, he can’t help but feel awkward with today’s pro forma expressions of regret from abort culture.

“Well, she was 12 years old,” he bluntly tells a television interviewer (the goad error was probably intentional). “Thirteen the next day. She was 14 then.”

A little later it’s the topic of cheerfulness: “I had so many cousins ​​that I had to marry one of them,” he says blankly and proudly unimpressed on a talk show.

Lewis’ convoluted family tree and ever-changing marital status give Coen occasional opportunities to spice the material with dry humor. Singer and televangelist Jimmy Swaggart is pretty much introduced as Lewis’s “first cousin and second cousin,” while “ex-wife and cousin” naturally accompanies footage of a televised conversation with wife number three, Myra Gale Brown, describing an incident in which Lewis shot his bassist.

“The bass player ended up coming back to him, didn’t he?” says the host through a forced smile. “Oh no. No, he didn’t,” Brown replies.

But for the most part, the film’s style feels intentionally anonymous. Rather than doing the usual chronological run-through, it dips in and out of interesting areas, but never gets too deep — while Lewis’ constant boasting in interviews eventually grows tedious. Perhaps this lack of editing is Coen’s trademark after all: we’re shown the man’s genius and flaws at crackpot speed, and left to draw our own conclusions.

The best old-fashioned dating tips to follow at any age

'Come on England!': How the country is getting excited for Euro 2020 semi-final

How (not) to do Juneteenth, from freedom panties to horrifying video game cosmetics