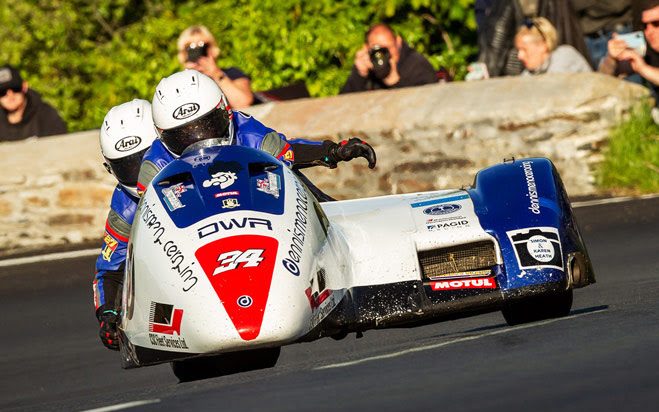 Two more riders were killed at this year’s Isle of Man TT, bringing the total death toll to five over the past nine days.

The death toll is the worst involving the TT since five people were killed in 1989. The highest number ever recorded at a TT event was six in 1970, and since racing began on the Snaefell Mountain Course in 1907, 265 racers have lost their lives.

Roger, 56, from Crewe was driving the sidecar at the start of the second lap when he crashed at Ago’s Leap, a famous section of the 37.73 mile course which precedes a steep Bray Hill drop.

Bradley, 21, also from Crewe, was riding as a passenger in the onboard sidecar in his first year at the TT when they crashed just short of the one mile mark.

The tragedy is the second to afflict the sidecar event this week after France’s Cesar Chanal lost his life at the same spot on the track on the opening day of the race last Saturday. His co-driver Olivier Lavorel is in critical condition at a Liverpool hospital.

“Roger and Bradley were father and son, or driver and passenger.

“Roger was an experienced TT competitor with today’s race marking his 20th TT race start. He competed regularly in the TT from 2000 to 2008 before returning in 2010, 2017 and at this year’s event. In his career, he has a total of twelve top 20 finishes and four top 10 finishes, as well as 10 bronze replicas.

“Bradley was a newcomer to TT and on Monday he finished his first TT race and secured an impressive 8th place alongside his father. 2022 was their fifth racing season together and Roger and Bradley were regular podium finishers and front runners in the British F2 Sidecar Cup Championship, finishing second in the Championship in 2021.

“The Isle of Man TT Races extend their deepest condolences to the families, loved ones and friends of Roger and Bradley.”

The tragedy is the latest in a harrowing return to TT after two canceled years in 2020 and 2021 due to Covid. Welshman Mark Purslow died in a crash in practice last week and veteran Northern Ireland rider Davy Morgan died following an incident in the first Supersport race on Monday.

Friday was set to be the last day of the two-week festival, which was set to host the blue-rib senior TT – as well as the delayed Supersport race two, which had already been rained out on Wednesday and Thursday – on either side of the festival’s second sidecar event .

But although both the Supersport and Sidecar races were able to get underway, deteriorating weather conditions meant that the week’s main event had to be postponed to Saturday.

Report: Knicks trading No. 11 pick Ousmane Dieng to the Thunder

ENG vs NZ 2022: “Not too many can argue”- Simon Doull believes Babar Azam is ‘best player in the world’