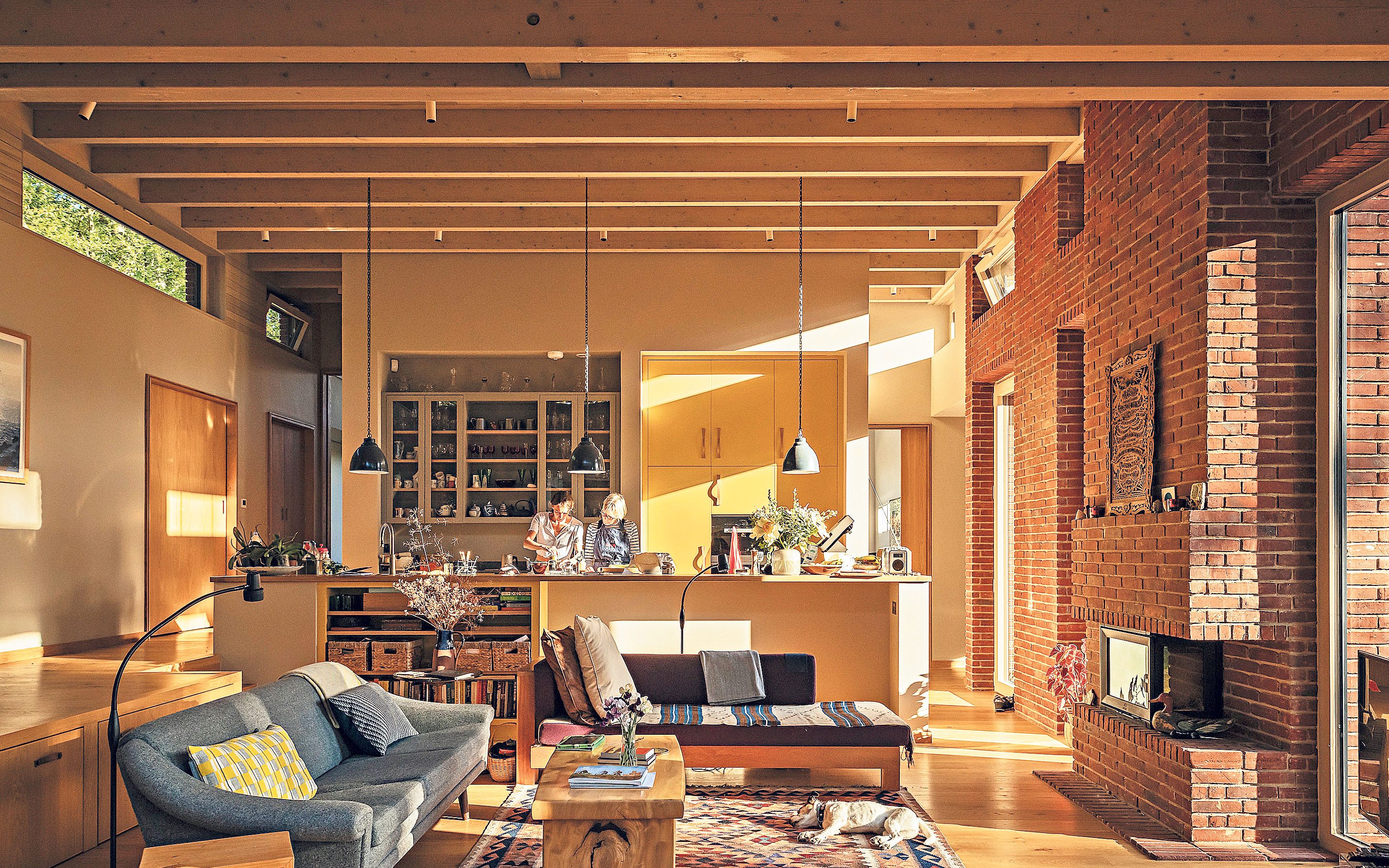 They hired Wendy Perring and Collette Raine from PAD Studio because of their knowledge of the area and planning laws, as well as their experience in designing energy efficient buildings.

“We always take a fabric-first approach and design the building envelope to be as energy efficient as possible,” says Perring. “It’s about clever design: maximize solar gain in the winter and minimize it in the summer and make the shell of the house work really hard for you.”

With this house, they have selected the materials specifically for these requirements, with a brick facade and lots of exposed brickwork inside as well. “A lightweight structure, say a timber frame, heats up very quickly and cools down very quickly,” Perring says, “while a concrete or brick thermal mass house absorbs the sun’s energy during the day and when the temperature drops at night, you return the energy away. There are much fewer temperature fluctuations, so you have a very comfortable indoor climate and no longer have to heat it in the evening, which is very energy-intensive.”

To keep the house cool in the summer, they designed an overhang that runs around the exterior of the building. “A lot of people say it looks a lot like Frank Lloyd Wright,” Perring says, referring to the American architect whose Prairie-style buildings featured flat roofs and overhanging eaves, “but it really shades the windows in the summer when the Sun shines higher in the sky while it warms the house in winter when the sun is much lower in the sky.”

Passive ventilation via high windows, which the Thompsons usually have open, also helps to cool the house in the warmer months: “In the summer, if you open the doors to the terrace and open the high windows to the rear, you get a nice cool feeling Breeze blowing through the house, which works really well,” says Perring. “No one should use air conditioning.”

The couple now pay about 80 percent less energy bills than they did in their previous home, which Charlotte attributes in large part to the efficient insulation installed in the home and the fact that the windows are triple-paned. It was a sizeable investment (triple glazing can cost up to 20 percent more than double glazing) but, Raine says, “it really makes a difference.”

Charlotte agrees: “During our first winter here, it snowed once and I said to Graham that I felt a bit chilly inside. Turns out our thermostat was set for frost. The fact that it was only slightly cooler inside than we wanted, even in the freezing cold, was amazing.”

The room and hot water are heated by a geothermal heat pump, which extracts energy from the ground via a heat exchanger. “You still have to plug power into it, but it’s really efficient,” says Perring, “so for every unit of power you plug into it, you get about four of them.”

Solar panels on the roof generate electricity (the Thompsons are currently looking into purchasing a battery so that excess solar power can be stored). And since all energy efficiency measures were incorporated into the house design from the start and not screwed in first, the building is designed in such a way that the panels on the roof are not visible from the ground.

The couple moved into their new home in July 2019. “It felt like home straight away,” says Charlotte. “The whole process was a really pleasant experience. We feel incredibly privileged to be able to build such a house, with elements like the heat pump and insulation that will be with us for a long time.

“Downsizing can be perceived as a bit sad – something you do when you’re nearing the end of your life – but it was really an adventure.”

This saves energy and money in the kitchen

Energy values ​​are everything

Given that the fridge is running all the time, it’s no wonder it accounts for 63 percent of all electricity use in our homes — or more if you have an American-style geriatric fridge-freezer. According to BeEco, switching a fridge to a new model that is two energy classes better can save £190 on energy bills. The new refrigeration rating system can be confusing: it now runs from A to G (previously A+++ to G), with icons for fridge and ice compartments and noise emissions. Today’s most efficient devices are given a B or C (and what used to be A+++ is now D) to encourage manufacturers to make even more efficient devices. Ali Hamid of Jigzaw Interiors in London recommends LG for fridge-freezers (one of his models is already A-certified and uses 60 percent less energy than a standard unit), as well as Bosch and Siemens. “If you need more storage space, two freestanding fridge-freezers can be more energy efficient than one giant American fridge-freezer,” he says.

Dishwashers are another energy-saving game: A dishwasher uses seven times less water than handwashing, but you can save even more water and electricity by choosing an ultra-efficient half-load machine. “The best models sense what they have inside and use up the necessary amount of water,” explains Hamid.

For those who don’t have the budget for one of Miele’s G7460 SCVi dishwashers (£1,749; miele.co.uk), which heats water using previously stored heat, he recommends the Siemens IQ700 range of dishwashers from £999.

Rethink the material of your flooring

While reclaimed hardwood floors may seem like the obvious choice for a carbon neutral kitchen, installation can be so time-consuming and costly that many people choose not to. Cork flooring is the most popular alternative right now, says Tim Burgess of Zero Kitchens. It’s soft and warm underfoot and hardwearing, and companies like colourflooring.co.uk are pushing the envelope. Linoleum is also making a comeback, along with terrazzo tiles from bertandmay.com, which were once used on supermarket floors and are made from recycled glass, marble and quartz scraps.

https://www.telegraph.co.uk/family/life/best-ways-cut-energy-bills-home-cost-living-crisis-2022/ How to cut down the cost of energy bills at home in 2022

a boisterous and bloated zombie thriller

Man Felt Ashamed & Embarrassed Once His Card Was Declined, Seconds Later, Cashier Reached Across The Counter – Women After 40