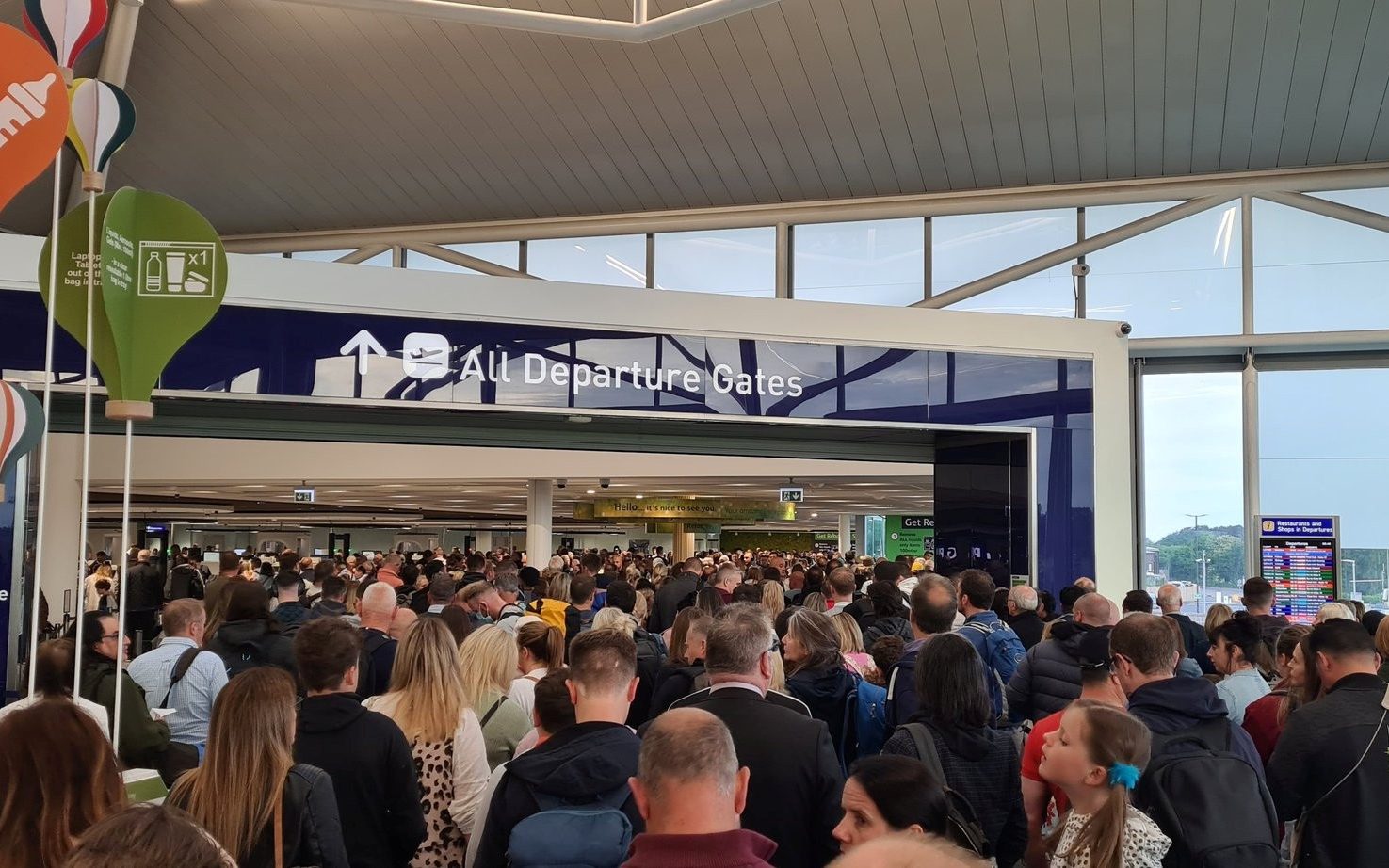 Gatwick is certainly not immune to the chaos and has seen a string of canceled flights. Last Friday, easyJet canceled more than 200 flights over a 10-day period. The move resulted in 40 canceled flights (mostly from Gatwick) on June 1, many to popular European holiday destinations such as Bordeaux, Sicily and Prague. This week there were also daily cancellations. On Monday, flights to Rome and Seville were canceled just an hour ahead of their scheduled departure times.

Large queues have been reported in recent days, but it should be noted that experiences vary widely. Travel consultant Paul Charles tweeted Tuesday morning that there were “no queues” at the South Terminal, adding that “security channels [were] flow smoothly.”

Which airlines are most affected?

EasyJet and Tui have canceled most flights at short notice this six-month period. British Airways has also cut its flight schedule significantly, despite many of its cancellations being announced weeks in advance.

After confirming the spate of cancellations in Manchester, a Tui spokesman said: “We would like to apologize to our customers who have experienced flight delays and cancellations over the past few days and understand that many of our customers have been looking forward to their holiday for us for one long time.”

Should I avoid booking flights with a low-cost airline?

Whether you booked your flight with a low-cost airline or an incumbent airline doesn’t seem to have much of an impact on whether it’s cancelled. Ryanair, for example, has had relatively few cancellations, while British Airways has canceled a large number of flights.

Are queues worse in the morning?

As more flights tend to take off in the morning, it follows that this is the time of day when the most queues would occur. However, there is no guarantee that waiting times will be significantly shorter in the evenings, especially when fewer staff are on duty.

Should I report to security or push ahead if time is short?

During the latest round of Easter travel chaos, airports like Manchester put in place a system to expedite passengers whose flights were imminent and it has become an increasingly widespread practice. If time is short, try to alert a member of staff to your predicament. However, there is no guarantee that you will be sped up, especially if you queue outside the terminal and there is no employee in sight.

Where is the best place to find information if my flight is delayed?

Passengers have reported a bewildering lack of information when their flights have been delayed. While it’s always worth locating an airline representative, a good hack is to track the incoming flight on a website like flightstats.com. This will give you the clearest and quickest information about how long your own flight will be delayed.

When should I arrive at the airport?

Some airlines email customers advising them to arrive three hours before departure, even on short-haul flights. However, early risers should be warned that some airports do not allow you to go through security or check in your luggage until four hours before departure. And as detailed above, Bristol Airport has claimed too many early arrivals have added to the chaos.

For those determined to arrive at dawn, check-in desks and security at Heathrow normally open at 4am, while security at Gatwick North Terminal opens at 2am.

For those worried about potential queues, certain airports allow passengers to pay for fast track security (which costs £4 in Manchester and £5 in Stansted). In the current circumstances, however, there’s no guarantee you’ll sail through – passengers in Manchester previously reported two-hour waits, even in the fast lane.

What should I do if check-in or security checks cause me to miss my flight?

In recent months, more and more passengers have reported missing flights due to waiting times at the airport.

Unfortunately, airports have no legal obligation to assist or compensate passengers who miss flights due to baggage check or security delays. They may try to rebook you on another flight, although this cannot be guaranteed.

More robust travel insurance could cover your predicament if you can show you made it to the airport on time.

What should I do if my flight is delayed or cancelled?

For delays of three hours or more caused by the airline, you are entitled to a cash payment of £220 for short flights and £350 for a 1,500-3,500km flight. For flights over 3,500km you should be paid £520 for a three to four hour delay. You don’t have to board the flight if it’s delayed five hours or more and you’re entitled to a full refund within seven days. However, compensation does not apply in all cases.

How can I save my vacation if my flight is cancelled?

While availability is certainly tight, there are still options if your flight is cancelled. If you’re determined to fly abroad (and ready to think outside the box), use the flight comparison website Skyscanner’s search function to find cheap routes. This weekend, the southern French city of Rodez can be reached for £89 return, while flights to Sweden’s sixth largest city, Orebro, are just £64.

In the UK, try calling holiday rental companies to see if there have been any last minute cancellations. Some companies, such as B. Cornwall’s Latitude 50 post late availability on Twitter.

So far no problems have been reported on cross-channel routes, although services are expected to be very busy and passengers are advised to arrive on time.

Will these problems come back in the summer?

It is difficult to predict whether these problems will continue into the summer holidays, but apparently the situation has not improved much since Easter. Many airlines, including British Airways, have launched a huge recruitment drive that could help ease the woes but may not be in time for the summer.

It is also worth noting that this is not an exclusively British problem. A large number of domestic flights have been canceled in the US, while long waits have been reported at Amsterdam’s Schiphol Airport.

So far, no significant problems have been reported on the Channel ferry services, although the services are very busy and passengers are advised to arrive on time.

However, the same cannot be said for Eurostar today. Problems with French-operated automated border gates at St Pancras station forced thousands of travelers to queue that snaked onto the streets of London.

Eurostar said: “Our stations are very busy today. Passport and security checks are taking longer than usual due to problems with the French authorities’ control systems.”

Eurostar passengers are entitled to compensation if the train is delayed more than 60 minutes. Visit compensation.eurostar.com for more information.

When will UK roads be at their busiest over the anniversary holiday?

Staycationers may feel complacent for missing out on the chaos at the airport, but they may still have to contend with extremely busy roads in the UK during the Jubilee Bank Holiday.

New figures from the RAC suggest an estimated 20 million leisure trips are made between Wednesday and Sunday. Friday is expected to be the busiest day on the roads as day-trippers connect with families returning home from mid-term holidays.

Meanwhile, data from transport analytics specialist INRIX suggests that starting early or postponing trips to later in the day could be the best way to avoid queues, as major roads are expected to be particularly busy between 10am and 3pm.

To break up that potentially painful journey, why not explore the best places to stop near the UK’s busiest motorways.

Has your trip been interrupted this week? Comment below to join the conversation

https://www.telegraph.co.uk/travel/advice/bank-holiday-travel-chaos-flights-cancelled-how-ticket-refund/ How to survive the Jubilee bank holiday travel chaos

A hem! Mark Rylance cuts it brilliantly in this seamless whodunit

9 of the most famous celebrity twin pairs in Hollywood, from Mary-Kate and Ashley Olsen, and Brangelina’s children Vivienne and Knox Jolie-Pitt, to Khloé Kardashian’s besties Malika and Khadijah Haqq

The secret to a perfect holiday in your 60s

Antyesti in Brooklyn: How NYC honored my father upon his death, during a time of anti-Asian hate