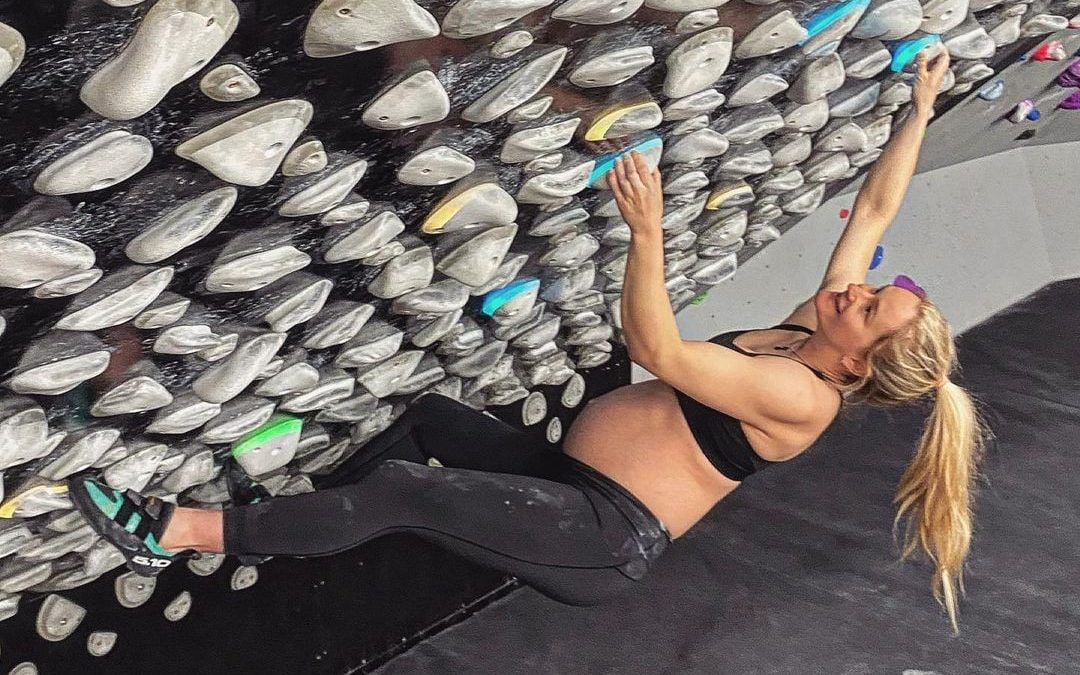 I have a team of specialists who support me. I started working with a women’s health physical therapist at eight weeks of pregnancy to know that what I am doing is safe for me and my baby.

I didn’t even know what the metrics were around exercising during pregnancy, so I wanted to work with someone who could keep tabs on my body. So if something went wrong, we were very proactive. (And by “go wrong” I mean from a physiological perspective, not a crash perspective — I’ve climbed a lot in my career without falling.)

I also worked with my team that was by my side during the Olympics and communicated with my midwives and my doctors.

I also made big adjustments when climbing. I don’t make big dynamic moves and there are always ways to back off or come down safely. My husband also supported me the whole time. I think a lot of people were wondering why he saw him spot me even though I’m so confident I won’t fall, but he’s actually there to give me a little extra boost when I do need, and not as an observer. He knows very well what I am physically capable of.

What people see, how I do it, they perceive in their mind as difficult because it could be for them. That was one of the hardest things to convey: I’m doing maybe five percent of the climbing I did in the run-up to Tokyo. These climbs are not difficult for me.

“This is about athletes who break stereotypes and taboos”

I’ve seen so many friends of mine go through pregnancy and keep climbing – some climbed literally to the day they were born. They all made different choices because every pregnancy is different. There are athletes like Rachel Atherton, who continued mountain biking well into her pregnancy and did so with no apologies. That inspired me.

I think it’s so hard for people to understand where her comfort zone is because she’s a top athlete, and that’s especially true in non-traditional, often labeled “extreme” sports like ours.

I had no idea what my pregnancy would be like and was curious if rock climbing would still satisfy me because for as long as I can remember I’ve found that in pushing my limits and not fooling around and doing easy climbs. But it was incredibly refreshing to reconnect with the sport in a way that I had kind of lost.

I’m not surprised I’m still climbing just days to my due date. I’m a bit more tired than usual, I can only do about an hour these days, but I’m surprised at how good I still feel. My body needs this movement, as does my mind.

This is about athletes who break with clichés and taboos. I’ve received thousands of messages of support and many from women who actually kept climbing because they saw my posts. That alone makes all the judgment and hate worth it.

https://www.telegraph.co.uk/sport/2022/05/04/shauna-coxsey-exclusive-just-making-choice-like-pregnant-woman/ ‘I won’t be shamed to stop climbing, even if it’s just days until I give birth’

ENG vs NZ 2022: “There’s a lot of rubbish that is spoken”- Jonny Bairstow hits back at critics after stunning Headingley hundred