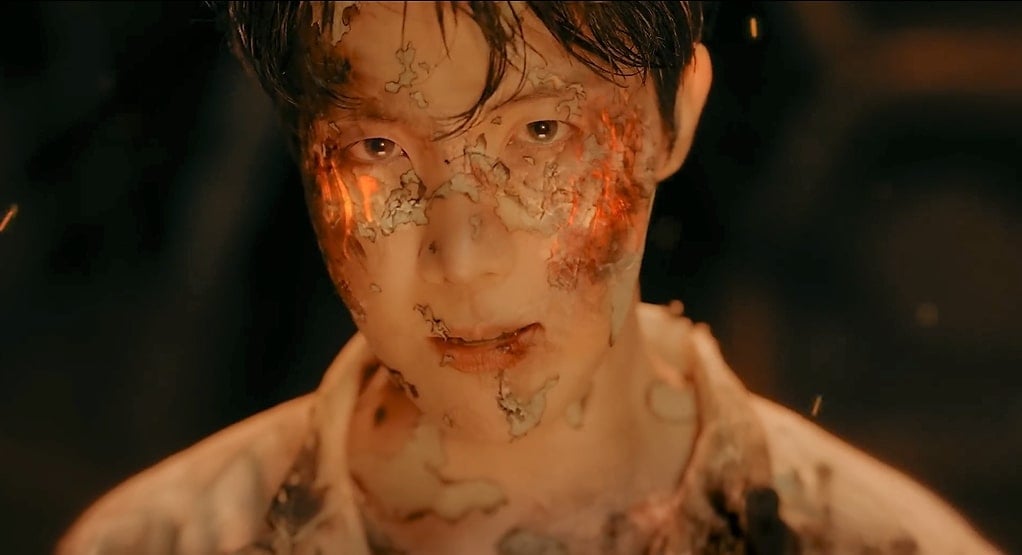 BTS’ J-Hope has released his highly anticipated debut solo album, Jack in the Box, and the EP’s second single, Arson, is everything we hoped for and more! A follow-up to the album’s somber lead single “More,” “Arson” J-Hope showcases a different side of his artistry, coupled with his foray into darker synths and an even grimmer hip-hop sound.

With this latest release from the 28-year-old rapper, BTS have officially opened an exciting new chapter in their musical careers as they each focus on solo activities following their recently announced hiatus from making music as a group. Although the septet has already released solo singles, collaborations and mixtapes, J-Hope’s newly released 10-track studio album heralds the era of single full-length album releases from each BTS member.

Read on for the English translation of J-Hope’s latest track, followed by a full breakdown of the thought-provoking lyrics and meaning behind “Arson.”

J-Hope’s “Arson” consists mostly of Korean lyrics. Check out the English translation of the single via Genius below.

VERSE 1
Let’s burn to my passion, burn to mine
Hopes, burn My life, burn Every day I ran Couldn’t stop That’s when I burned it
everything And I wanted everything fame came first (first) money? Of course (understood)
Popularity too (Woo) Couldn’t help but go into overdrive. The motivation behind it
my mindless ambition when I’m sweating, ooh

VERSE 2
I shower in gasoline (Oh)
To make a fire (Oh)
On my feet, on my legs (Oh)
Even hotter, run my way (Oh)
Heat up records (Oh)
My popularity at the top (ayy)
And up goes my born hater (Ayy)
Horns that ring every time (Woo)
But even that I like (Woo)
Because with my fans
With my tag
with my buddy
We burn bright together
All day
Rational accomplices
Arsonist was fun (Heeh)
Have nothing to fear
One second ahead, fuck off (fuck off, fuck off)

CHOIR
In case anyone asks me
“Right, I lit the flame”
Now I’m wondering, choose what
Do I put out the fire or burn it brighter, yah, yah, yah, yah
(arson)

VERSE 3
It is finished
My dreams, done
success, done
My part of the job, done
What else, none
Less is more
Go when it’s quiet
Applause, that’s the style
set fire
Is something I did for myself
Who knew the world
Would burst into flames
I see my marks after things cool down
The fire was too big to put out, it was serious arson
Oh shit

VERSE 4
It’s too hot, no
I wake up from the pain
Contact my inner self
Shrouded in fear
Nobody can’t, nobody stop that shit
Delete the fire
Only I can (Yeah)
A fireman of chaos
Oh, a dark path like soot awaits you even when the fire is out
tell me
The huge hurdle in front of me, what’s my move
To dodge the game board throwing my rock

What do J-Hope’s “Arson” lyrics mean?

“Arson” reflects the album’s overarching theme, which is J-Hope’s desire to reveal himself unfiltered and uncensored. “Let’s burn / It’s done,” the singer-songwriter opens the track, repeating this phrase over menacing siren noise and a simple, scruffy drumbeat. Fusing elements of electronica with hip-hop beats, the song finds the artist at a crossroads in his wildly successful musical journey, where he ponders where to go from here. “When someone asks me / ‘Right, I lit the flame’ / Now I’m wondering, choose what / Do I put out the fire or burn it brighter,” J-Hope muses in the chorus.

As the song progresses, J-Hope begins to come to terms with the inevitable pressures and anxieties that come from the amount of astronomical achievements he’s achieved. “My dreams, done / Success, done / My part of the job, done / What else, none / Less is more / Going when there’s still applause, that’s my style,” he raps in the third stanza.

Though affiliation with BTS has brought J-Hope immense success and popularity with legions of fans, the singer briefly addresses the group’s decision to take a break rather than burn at both ends. “Setting the fire / is something I did for myself / who knew the world / would burst into flames,” he continues, suggesting that realizing his potential as a solo artist has broadened his understanding of his art. Though it must have been scary at first, embracing this side led him to discover endless possibilities as a musician even at the height of his success.

How does J-Hope’s “Arson” music video fit with the lyrics?

The accompanying “Arson” music video begins with J-Hope walking slowly, Joker-style, under a bridge surrounded by burning cars. As the world erupts around him, the singer initially appears unharmed from the fire, clad in a pristine white jumpsuit. However, as the situation escalates, plumes of smoke cover the entire screen, later revealing the charred and blistered singer. The camera zooms in on the singer’s beating but burned heart, then zooms back out to show J-Hope smiling despite his wounds glowing like embers.

The chilling imagery mirrors the song’s lyrics, which include “‘Cause with my fans / With my label / With my fellaz / We burn bright together.” Here, J-Hope reflects on how his fans give the group the strength to handle even the toughest Haters and challenges to endure. When the naysayers go low, J-Hope and BTS go higher.

However, it could also be interpreted as the singer breaking the public stereotypes that have been imposed on him by setting fire to these false perceptions and shining brighter than ever.

As the revelation stuns viewers, J-Hope lies on the ground as the flaming shapes around him spell out the words “arson.”

Check out the mesmerizing music video below!