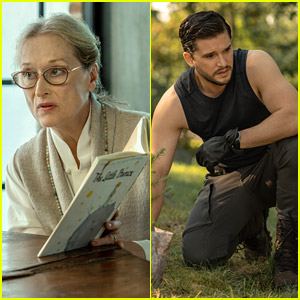 Meryl Streep and Kit Harington can be seen in the very first images to be released by Apple TV+ extrapolations.

The two well-known actors will join so many others in the upcoming series, which has been described as “an exciting drama that introduces a near-future where the chaotic effects of climate change are embedded in our daily lives.”

Apple said the show will feature eight interwoven stories about love, work, faith and family from around the world that will explore the intimate, life-changing choices that must be made as the planet changes faster than the population.

Every story is different, but the struggle for our future is universal. And with the fate of humanity locked against a ticking clock, the battle between courage and complacency has never been more urgent. Are we brave enough to become the solution to our own undoing before it’s too late?

extrapolations will debut with the first three episodes on Friday March 17th. New episodes will follow weekly, every Friday until April 21st.

Was Denji's date with Asa inspired by Makima?

What Is Tantric Sex? Benefits and Positions to Try

Trainwreck: Woodstock ’99 review – a trainwreck that you can’t stop watching

The Voice season 22, episodes 21 & 22 preview, release date and where to watch online