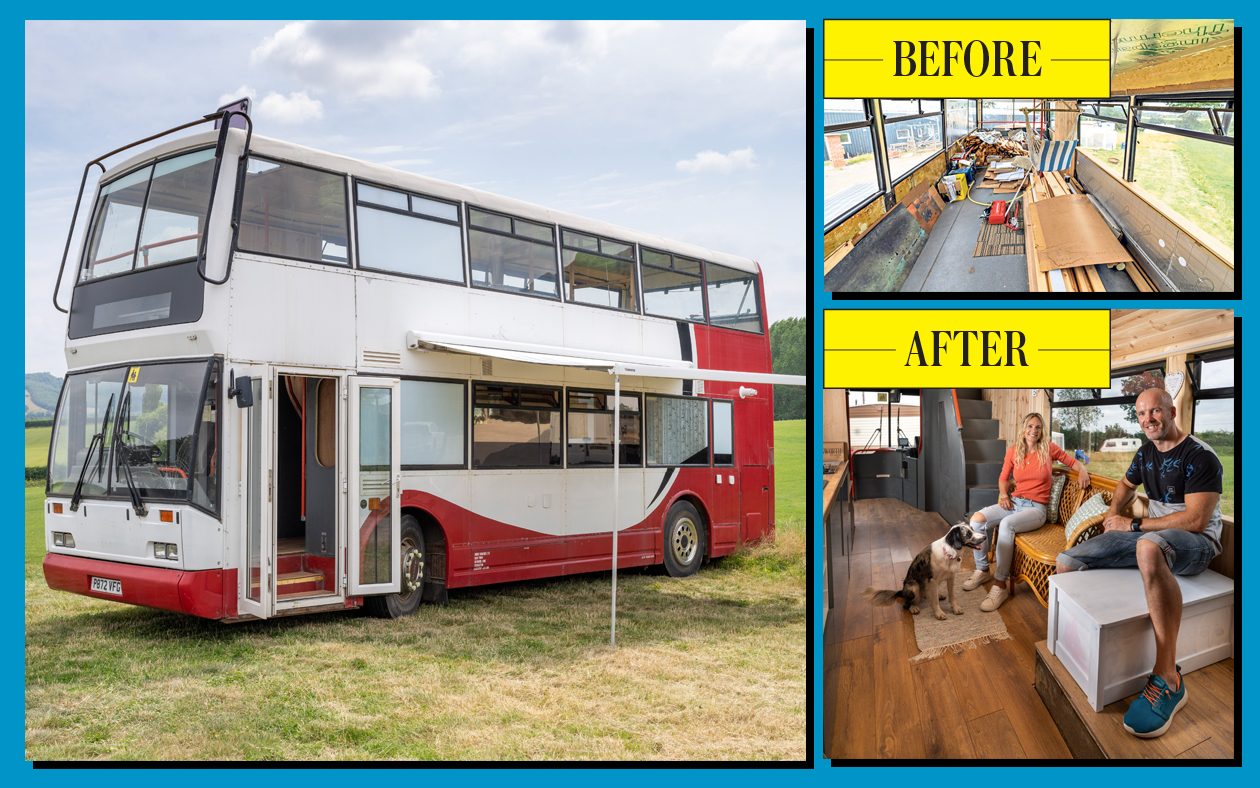 The couple, who met in Portugal where Gareth worked as a kitesurfing instructor and Lamorna was on holiday, have found a very supportive online community.

“The Skoolie movement in the US gave us a lot of inspiration and the bus now has its own Instagram page – We Bought a Double Decker Bus,” says Lamorna. “We discovered an amazing group of people in the #vanlife, #tinyhouse, #offgrid communities.”

Not all family and friends are so positive. “We’re 39 and 40 years old and it seems ‘should’ settle down,” says Lamorna. “We would like to have a family someday, but first we have to get the bus ready.” In the meantime, their crossbreed spaniel Maya keeps them company.

Lamorna’s two younger sisters share a love of travel. Sapphire is studying for a master’s degree in consulting in Vancouver and Venetia is an events producer in Los Angeles.

Her parents – a retired IT consultant and a jewelery designer who live in Bedfordshire – have been encouraging, although the pandemic has meant they have seen less of each other.

“Christmas 2019 was the first time my family had been together in three years due to my travels and my two sisters moving abroad.

“Last summer my sister Venetia was supposed to get married at the Wilderness Festival – but everything had to be postponed. We were very happy that the wedding could take place this summer,” says Lamorna.

Overall, despite their challenges, the Hollingsworths have no regrets. or ‘But how do you want…?’

“We don’t have the answers to all the questions yet, but isn’t that always the case when you’re doing what a lot of people would consider crazy? I know a lot of people are afraid of the unknown, but I’m looking forward to the next chapter.”

And while there will inevitably be a few more bridges to cross along the way, the Hollingsworths will make sure they aren’t low bridges.

When Victoria MacDonald, 29, and her partner, Scott Ross, 32, sold their home in March this year, they knew they had to make some compromises – but moving from a stately home in the Scottish Highlands to a Citroen van ( Nickname ‘Van Heilan’) didn’t bother them

‘We used to live in part of a manor house on the Aberdeenshire coast. Our living room was what used to be the ballroom and the house had an incredible view over the sea,” says Victoria.

But when her blog, Aye Life, started to take off, life on the road beckoned. “We started the blog when I had to quit my job because of severe depression,” says Victoria. “It’s become our whole life since then.”

https://www.telegraph.co.uk/family/life/ditched-house-double-decker-bus-found-ebay/ ‘We ditched our house for a double-decker bus we found on eBay’

Ellie Goulding: 'Why I kept my lockdown pregnancy a secret for 30 weeks'

Like Sarah’s family, I know the pain of searching for a missing loved one – only to discover a tragic end